The Toyota HiLux and Ford Ranger have cemented themselves as Australia’s favourite cars for the fourth year in a row as they’ve topped the list for new car sales for the 2019 calendar year.

According to the new car sales results for 2019 released by the Federal Chamber of Automotive Industries (FCAI), Toyota topped the car sales list in 2019 with 47,649 units of the HiLux sold, while Ford sold 40,960 units of their Ranger.

While these utes can boast topping new car sales again for 2019, these figures are lower compared to the previous year. 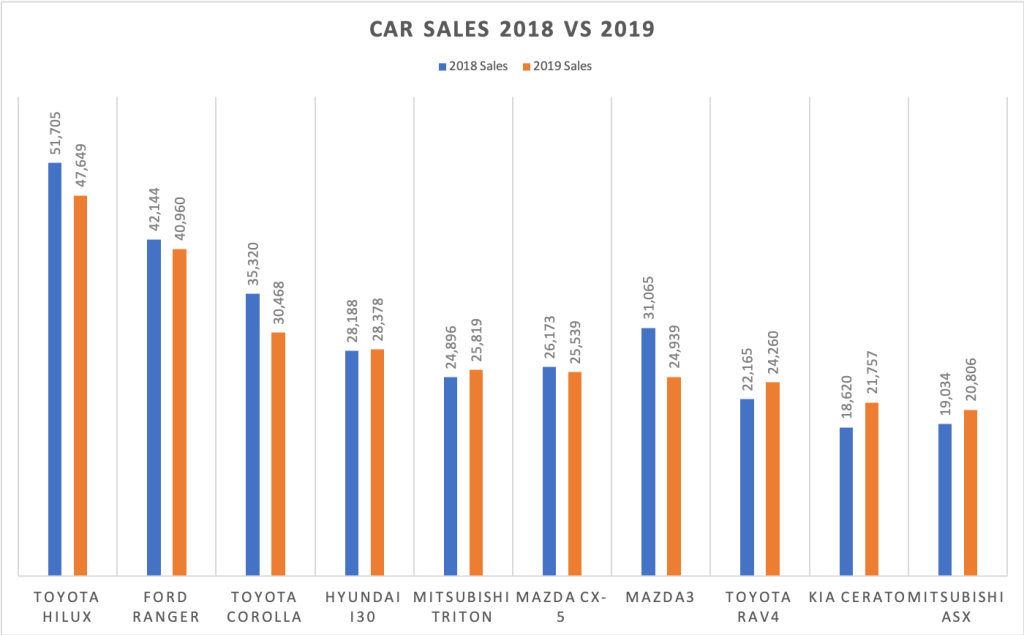 There has been a trend of declining car sales since 2018, with new car sales decreasing by 3% respectively during that year.

The 2019 new car sales figure was the lowest annual sales result reported in VFACTS since 2011.

The Chief Executive of the FCAI, Tony Weber, has stated that, “Regarding the actual new vehicle sales results: 2019 reflects a tough year for the Australian economy, with challenges including tightening of lending, movements in exchange rates, slow wages growth and, of course, the extreme environmental factors our country is experiencing”.

Mr Weber observed that consumers were shifting towards SUVs. In 2019 SUVs accounted for 45.5% of the total market share, a 2.5% increase compared to 2018, however SUV sales declined by 2.4% in 2019 compared to the previous year.