The Federal Chamber of Automotive Industries (FCAI) reported November new car sales figures for new vehicles in Australia. For the first time in 31 months the figures were positive, which ended the longest market slump since the Global Financial Crisis over a decade ago.

Year-to-date, 821,316 sales were recorded which is a 16.1% decrease for the same period in 2019 where 978,628 units were recorded. While the decrease has been attributed to COVID-19, travel restrictions have contributed positively to Australians buying cars and holidaying locally.

The highest selling car was the Toyota Hilux, which is on its way to being Australia’s top selling car for the fifth year in a row, with 5,038 units sold in November, compared to 3,687 units in the same period last year.

Of the top ten cars sold in November, Toyota took five of the spots, no doubt continuing its reign and large market share. 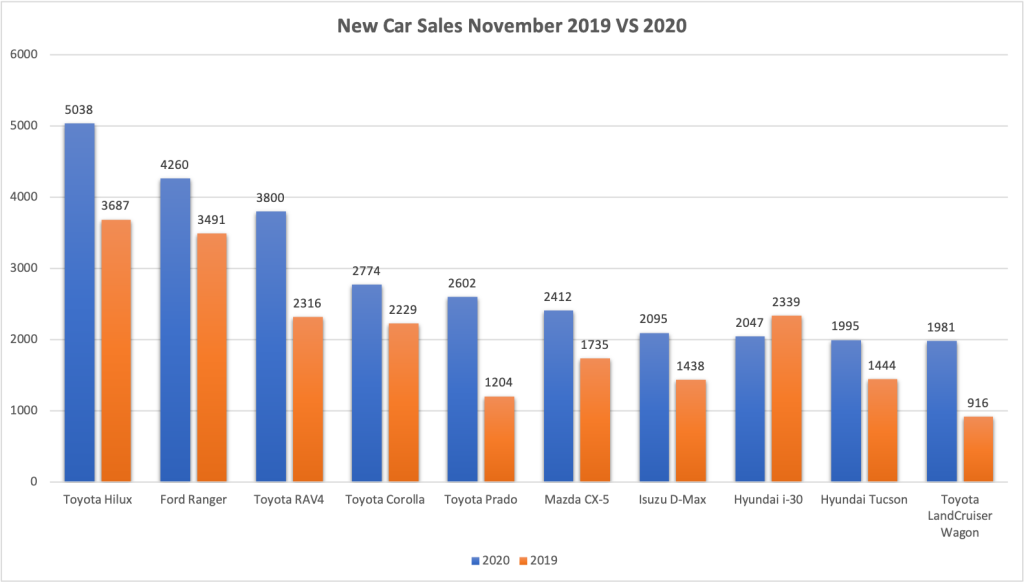 Toyota was also the top selling brand for the month with 23,204 sales, accounting for about 24% of all new vehicle sales, which is also a sharp increase of 36.9% compared to November 2019.

Japanese car maker Toyota had a large lead over the second top-selling car maker, Mazda, who sold 9,053 units in November. Hyundai came in third with 6,903 sales followed by Ford with 6,613 and Mitsubishi in fifth place with 5,488 sales.

In regard to market share for November, Toyota also led the way with a margin of 14,151 vehicle sales and 14.9% market share points. Second was Mazda and third, Hyundai. 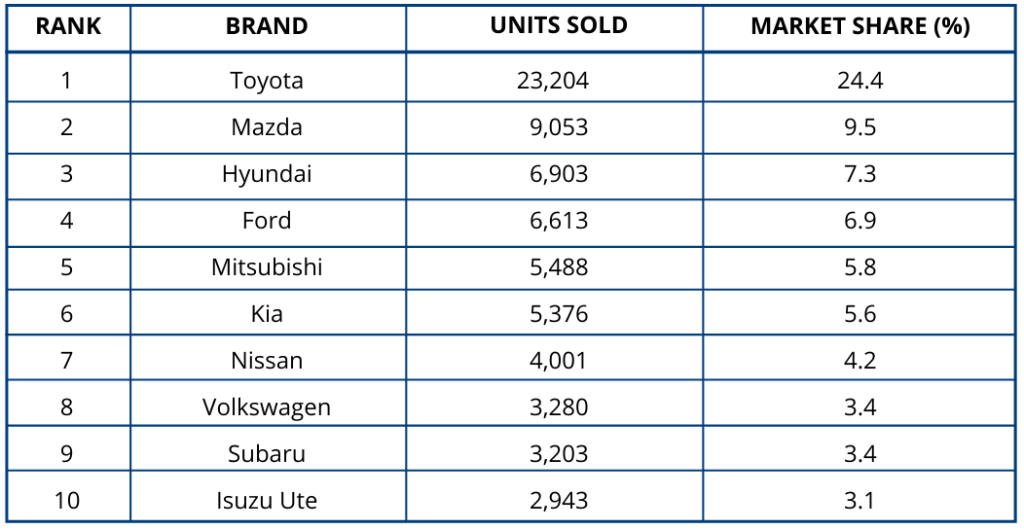 Tony Weber, chief executive of the FCAI, said the industry welcomed the first signs of recovery in the new vehicle market.

“Recent Australian new vehicles sales have seen 31 months of straight decline. This has been caused by a number of well recognised factors, including the COVID-19 pandemic, and environmental and financial issues.

What has contributed to the positive results for November 2020? Mr Weber believes that one factor could be the rising optimism from the Australian public as restrictions continue to ease.

“This increase in consumer confidence is backed by government support programs during the pandemic, the easing of lending restrictions, and the current competitive automotive market.

“We also believe that, given our inability to travel internationally, many Australians are choosing to purchase a new vehicle and holiday at home this year – and we fully expect to see a notable increase in family driving trips over the Christmas season,” Mr Weber said.

As Australians are purchasing cars to holiday locally, it’s reflective in the increase in SUV’s being purchased as it accounted for 52.5% of total sales for November, up by 26.5%, whereas passenger cars saw a decline of 10.1% compared to the same time last year.

Despite the promising signs, the car industry remains cautious about market recovery. Industry sources say that approximately one-third of new cars reported as sold in November were orders placed in previous months as dealers were compensating for lost sales earlier in the year.

Car dealers are also struggling to source and deliver the sheer number of new cars due to the interruption in production and shipping because of COVID-19.

Self-driving cars: who’s to blame when in an accident?
Used car stocks dwindle as prices and demand increase